Numerical weather prediction (NWP) system is designed to simulate and predict the atmosphere with a computer model. Weather Research and Forecasting (WRF) is a set of software applications used for this prediction. WRF is used extensively for research and real-time weather forecasting around the world.

Above commands prepared input to the real program for real-data simulations which were run using the commands mentioned below.

The forecast duration was kept constant for all the runs with different numbers of CPU cores (16, 32,64, 128, 356, 384). Time required for execution of WRF programs was used as a metric to measure performance.

Performance improvement is almost linear on scale as the number of CPU cores are increased. 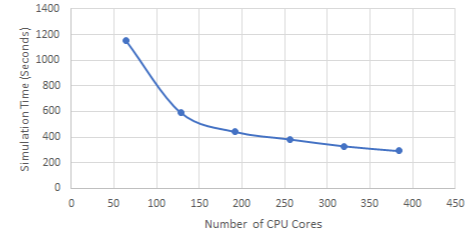 Results show that WRF can be run on SyncHPC cloud as efficiently as it would be using on-premise HPC cluster. Additionally, SyncHPC platform provides multiple features to use and manage cloud-based HPC resources efficiently.